I stumbled into this album while cleaning my old harddisk. It’s only of marginal interest for those who didn’t work for Merrill’s Tokyo at that time. 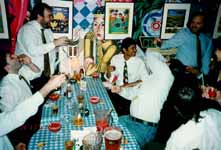 Bonenkai means Forget-the-year party in Japanese as oppose to Shinnenkai which is New Year party.

It’s 2003 out here and most of people gone from Merrill since. People rotate in Tokyo pretty dynamically. It’s slowed down a bit recently with market slump, but five years ago developers would stay in one place for 1-2 years on average and move. It’s was kind of spiral not only because each time you move, you generally get better pay, but also because there are few famous financial towers in Akasaka, Nihonbashi, Ebisu parts of Tokyo and people just hop from one to another, sometimes just from floor to floor. I know guy who eventually run out of new places to go and had to join company he had already worked for in past. We are talking about financial multinationals here.
Back to the album, I think only uncle Prem is still there. I heard that my then boss Steve Sadoff also quit Merrill’s after stint in New York. Richard Brezden is still in Merrills, but moved to New York, and when whoever remained in Tokyo go ski we always oversleep our breakfast. I heard that Ray is in California, but have no details.
Worst of all the Rock’n’Roll Diner which used to be one of the liveliest places in Tokyo and certainly best hamburgers in town, also went under. Well, in Tokyo the restaurant landscape never stops changing. If you come to Roppongi after 6 months and you most likely won’t recognize the place.
This is 1996 and I just start playing with Photoshop and as you can see I really enjoyed it. After 7 years it’s still remains my all-time favorite software.

This entry was posted in Life in Japan. Bookmark the permalink.