The tiny club was packed. Leaning on the bar I watched as the crowds swayed before me in euphoric abandon. To the hypnotic rhythms of the trance music, groovers grinded with their partners uninhibited while others writhed alone in self-absorbed oblivion. Flares flapped around platforms, bras flashed beneath shirts and hipsters wiggled below taut bellies. I'd already done my dancing for tonight, having earlier visited Geronimos, Gas Panic Club and Baccara. It was six-thirty in the morning and here I was, red-eyed and sleepy, catching up with friends in Roppongi, Tokyo's night life district.


A city where open-minded, unattached travelers from England, France, Sweden, Holland, Jamaica, the U.S.A, Canada, Australia, New Zealand and Israel constantly float in, hoping to make their fortune. Driven on by handsome salaries and the intense demands of one of the world's most structured societies - but where a gaijin's (foreigner's) behaviour is mostly ignored - unleashed partying often lasts 7 days a week, 12 hours straight. Often described as a fantasyland, Roppongi is the wildest playground in this crazy city. 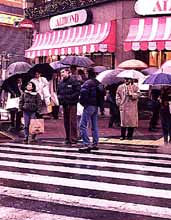 I'd begun my night crawl at around eleven o'clock, waiting for a friend at Almond Cafe, Roppongi's most beloved rendezvous point. Beneath the pink and white candy-striped awning, the singles gathered waiting for their dates. Overhead the thundering roar of cars and trucks on the two storey Shuto expressway intensified the grit and grime of this over populated, sprawling concrete metropolis. Embellished on the green paneled sides of the expressway were the words Roppongi - High Touch Town (some town planner's creative idea of adding glamour to the area). In carbon-monoxide gray metal the sign was an interesting oxymoron.

Taxis rolled around the corner by the dozens, dropping off their excited cargo resplendent in party gear finery. Japanese hostesses scurried across congested footpaths, their glitter hosiery slid into four inch heels in rainbow hues. With their gravity-defying hairstyles, carved into flicks, waves and curls aided by cement gel and hairspray, in varying shades of black through blonde and long painted talons they flutter down the streets like colorful tropical birds. Disappearing into neon encrusted buildings they shortly reappear singing sweet choruses of irasshaimase (welcome) in the hope of luring wealthy men into the plush interiors of their karoake drinking dens. For many of these women hostessing is a secret double-life they lead. Demure office girl by day, at night charming and beguiling seductress, capable of commanding the flow of conversation. An impossibility in Japan's male-dominated office hierarchy. 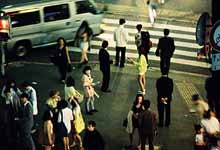 Cutting across the sprawling expanse of Roppongi crossing, an eight lane car speedway of carbon-monoxide, we're dwarfed by the giant Panasonic television screen. Currently screening is an AIDS awareness video, enormous condoms and people dancing and kissing bounce across the screen to blaring dance music. Apart from being one of the most congested cities in the world Tokyo is also one of the noisiest. One that also seems to live and breathe a steaming sexual innuendo.

We began at one the bars best loved by the expat' crowd, Geronimos. Upon arriving we could barely enter, the crowd spilling out the door. Voices yelled across the bar, bodies rubbed against one another, and in typical Roppongi style the proportion of men to women was 8 to 2. The predominantly English speaking crowd consisted of bankers, lawyers, English teachers, editors and journalists. No doubt they were out for a big night that was only just beginning.

As the crush of Geronimos continued beyond unbearable we wiggled our way out. Marching back across the crossing's eight lanes of fumes we set off for our next conquest, Gas Panic Club.

Make-shift tables now lined the narrow pavement set up by Israeli and Jamaican street sellers. Silver jewelry crafted on Koh Samui's beaches, sequined hats and bustiers, feather earrings, felt hats, Reggae T-shirts, Reggae cassettes, flowers and wind-up toys cluttered the tables and vied for our attention. While curbside several caravans were lined up offering doner kebabs, hot dogs and yakiimo (barbecued sweet potato). The smell of the hot greasy food was tempting but we were on a mission and eating would interrupt our schedule. Occupying prime realty, these entrepreneurs pay a high price for their space, payable to the yakuza, Japan's Mafia. Grateful to be granted any footpath by this unmerciful bunch, most streetsellers can only afford a season or two.

We bypassed all of this. Past shops selling cigarettes and cigars, tiny restaurants serving steaming bowls of ramen and udon noodles, neon signs that identified the hundreds of karoake and hostess bars in the area and fruit shops with gift wrapped honeydew melons for $35. Past Motown, once the place, now a soulless shell filled with unknowing tourists. While off in the distance Tokyo Tower, Japan's version of the Eiffel Tower - except 8 metres taller and painted bright orange - glows like a homing beacon for drunks.

Taking a side street past Luna Magria, an Italian designer with flamboyant taste in menswear, we made our way into an unassuming building. As the lift ascended the walls began reverberating with the booming music. Finally reaching the third floor the lift doors opened and a wave of hot, sweaty music swamped us.

As usual about this hour Gas Panic was heaving. Wild women clambered on and off the bar taking it in turns to dance above the masses and wind-up the ogling crowds of expat's, dancers, marines, hostesses, street sellers and a group of shady characters who no one knew what they did. This was not a bar you'd want your mother to see you in.


Of all the bars in Roppongi this was one of the largest. With all real estate priced at a premium most bars consisted of a minute hole-in-the-wall, a couple of seats, a narrow bar and maybe a dance floor. Gas Panic in comparison, where you could dance on the bar with ten others, was a generous spread. The minimalist decor included bare concrete walls, air conditioning ducts snaking across the ceiling, a wall of vinyl booths and a central semi-circular bar that serviced the thirsty hordes. It was hot sweaty, often wild and very popular.

We stayed and enjoyed the dance music, mingling through the crowds of familiar faces and watching the exhibitionists perform on the bar. As 2.30am rolled around, the gyrating hips beginning to make us dizzy and the music now thumping Guns and Roses, we decided to move on. Next stop - Baccara.

By this stage many of the neon signs had been switched off. The weary and famished began to gather at McDonalds amidst the smell of fried oil wafting from the drains. Salarymen who'd long ago missed the last train, now wandered towards the 500 metre taxi queue, a ride home that for some would cost $200. The waiting taxi drivers wondering when the late night revelers would finally give it up.

We'd keep them waiting. At Baccara, the crowd was just warming up. People poured in the door filling up the tiny dance floor where the music was getting funkier and the decidedly cool crowd of musicians, dancers, models, designers, artists and gaijin hostesses immersed themselves in infectious dance rhythms. Several faces from Gas Panic had also made the move to Baccara, faces you could be assured would be there until the end.


Baccara could go on for hours, for some it would be their final stop. Being a die-hard, I still had to make one last pit stop for the night - Breakfast Club. By this stage the makeup was a smeary blur and the beginning of the night a faint memory. It didn't matter that it was 5.00am fast approaching 6.00 and that half of Tokyo was rising for their journey into the office. Breakfast Club provided great music for a last dance for the night-owls who hadn't quite finished. 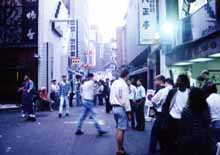 As the Club's red curtains strained to preserve the artificial night time within the club, I finally decided it was bedtime. Bidding my sayonaras to the swaying, blissful dancers, I eventually reached the door, opening it to the glare of a hazy gray morning. Emerging from the nameless building it was a wonder anyone ever found the place, another obscure bland building in a jungle of concrete cubes. Walking to the subway perhaps I would make one last revitalizing stop... K.F.C.

To gather some energy before the start of the night try these restaurants:

Cappricciosa's - the biggest, cheapest, tastiest bowls of pasta Tokyo has to offer.


Other good bars include:

Mogambos - the same owners as Geronimos, this is the original.

Have your address written down in Japanese for taxi drivers, often a map helps.

From Narita airport, to dial a Tokyo number requires the area code prefix 03.

Don't try to open a taxi door, they are operated automatically by the driver.

For asking directions ask someone young, much more helpful and better with English than the older generation.

Order via the wax food replicas in windows, gently drag the waiter outside and just point.