It’s difficult to surprise those who spent in Japan couple of years. When you wake up to the sound of a loudspeaker chanting the same mantra thousand times while slowly approaching your house, you instantly know: election time has arrived. Damn! Where did I put my earplugs? 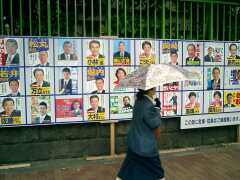 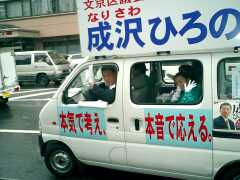 This week is the week when literally thousands of tiny vans equipped with loudspeakers cruise through the city from early morning until late. Each van carries a guy in the front seat and bunch of uniformed girls in salon. Guy usually decorated with wide strap over his suite. The white-gloved girls wave through the van’s windows and smile, while the van slowly moves along local streets polluting the atmosphere with nothing but the name of the guy in the front seat. … good morning everybody, it’s Narisawa Hirono, good morning everybody, it’s Narisawa Hirono … in an infinite loop. If you haven’t guessed yet, this means that the guy’s name is Narisawa Hirono and he aspires to be elected to a local assembly. All guys in vans look the same, keep quiet, smile humbly, only name distinguishes them. I am wondering how good Japanese citizens make their choice, by sound of the name syllables?
Unfortunately my pocket camera can’t grasp sounds. Otherwise I am sure that those who left Japan for good would be overwhelmed with nostalgia. Not us the survivors who are still here!

This entry was posted in Life in Japan. Bookmark the permalink.

One Response to Election Uproar