More than anything, it is the isolation of the place. For six months of the year during the great monotony of the north Russian winter, the inhabitants of Solovki have virtually no way of leaving their islands. The mail plane does visit once a week, but a place on the tiny aircraft is something few islanders can afford. Though it straddles the Arctic Circle, the White Sea does not freeze over; its ice floes, however, make any trip by boat a perilous affair. For the people of Solovki, there is little to do but sit back by the stove with a glass or two of vodka and warm themselves with the talk of summer days. 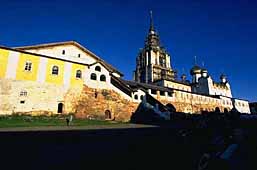 Isolation is something that has marked Solovki from the outset. The islands were first settled in the 1430s by a couple of monks from a monastery in Kirillov, far in the south towards Moscow. The two came in search of seclusion, and that they certainly found. They established their own monastery here, and after one of the monks, Savvaty, died he came to be revered as a saint by the Orthodox church. Ever since, Solovki has been regarded as a holy place - so holy that the locals put down the absence of snakes on Solovki to the islands' sanctity. 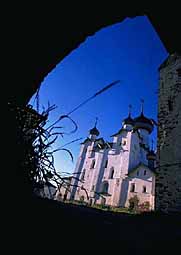 On maps, the archipelago usually appears as the Solovetski Islands, but the diminutive form of the name, Solovki, is how most Russians refer to it. The monastery founded by Savvaty and his companion stands on Solovetski, the biggest of the islands. As was then common in this region, a fortified structure, known as a kremlin, had to be built around the monastery buildings. Most of Solovki's kremlin dates from the late sixteenth century, and its fortifications are impressive, with 6-meter-thick walls that stand 11 meters high. These defenses certainly proved their worth in withstanding attacks by the Swedes and Livonians in the late sixteenth and early seventeenth centuries. Even against more modern firepower, the monastery was able to survive bombardment by the British Navy in 1854 at the beginning of the Crimean War. 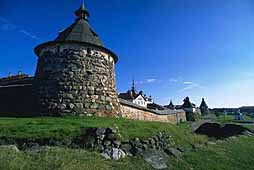 One of the most influential characters associated with the islands is Filip Kolychev, who made the monastery into a strong regional center of power. A boyhood friend of Russia's first czar, history's infamous Ivan the Terrible, Kolychev was head of the monastery for 15 years. Under his rule, Solovki became the most important monastery in the north of Russia. Kolychev brought prosperity to Solovki by utilizing the commodity that Solovki had in abundance but which was greatly lacking elsewhere. By boiling down the local seawater, Kolychev was able to supply distant parts of Russia with precious salt. It was under his direction that Solovki's formidable stone defenses were first constructed. To improve transport, Kolychev ordered that channels be cut to connect the many lakes on the islands. He was later called to Moscow by Ivan and appointed metropolit, head of the Russian church. But unfortunately he fell foul of the czar during one of Ivan's "terrible" moods and was eventually put to death. Kolychev, though, was to find his reward elsewhere. Despite his fall from grace with the temporal despot, Kolychev, like the first steward of Solovki also became sanctified by the church. 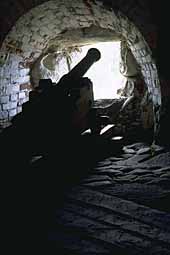 By the seventeenth century, Solovki had become one of the biggest monasteries in the world, with 300 monks and 600 workers, the latter mostly involved in salt production. With the power, though, came the attitude. Solovki's monks grew to such a position of importance that they felt themselves able to challenge czarist rule. In 1668, the monastery opposed central church reforms imposed by the patriarch, for which act they were branded as heretics. The monks took to arms and reprisals by czarist forces followed. Safe within their kremlin, the monks were able to hold out for eight years. Eventually, though, they were betrayed by one of their own brethren, who led the czarist troops to an undefended area. The monks' rebellion came to a bloody end and almost all of them were executed. 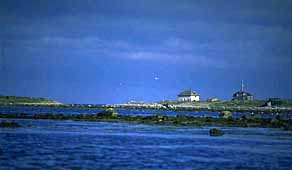 The next figure associated with the islands was one of the most colorful individuals in Russian history - the great westernizing czar Peter the Great. Peter visited the place twice, first as a young man in 1694 for three days as a pilgrim. Eight years later, he returned, with a fleet of 30 ships to defend the northern coast against Sweden. For a king-like figure, Peter was quite a jack of all trades, and he personally helped build one of Solovki's churches, an attractive small wooden building that still stands on one of the smaller islands.

The designs of later leaders of the country on Solovki were rather less benign. During Soviet times, the authorities decided that the stone fortress on an island far from anywhere would do just fine as a place of imprisonment. Solovki began as a detention camp in 1921 under Lenin. From 1923 to 1939, it came to be one of the most feared gulags in the Soviet Union. The Nobel Prize winner Aleksandr Solzhenitsyn had much to say about the great isolation of Solovki in Gulag Archipelago: "This was the basic idea behind Solovki. It was a place with no connection to the rest of the world for half a year. A scream from here would never be heard."

Today, about 1,000 people live on the islands, most of them relative newcomers. During Solovki's gulag days, the inhabitants were obliged to find alternative living arrangements on the mainland. The locals you meet come from different parts of the former Soviet Union: a national park warder from Belorussia, a school teacher from Siberia, an electrician from the Black Sea port of Odessa. 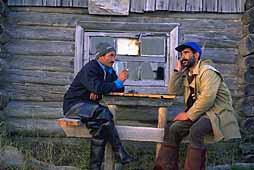 Though certainly better than in the prison-camp years, life on Solovki is not exactly easy. No one has much money. This and the remoteness of the place mean that the islanders have to be adaptable. Most are able to turn their hand at a whole range of jobs, from repairing a fridge to building a house. The sea still provides many with their means of livelihood. A common activity is the harvesting of the flat sheetlike seaweed laminaria, used for making marmalade, medicines and candy. Pyotr Shishman earns his living this way. He spends most of his time alone on a remote part of the main island and is able to get back to the main town only once a month. Shishman comments, "It was tough here in Soviet times, but it's getting harder and harder now to support yourself by gathering the seaweed. Gasoline prices are higher, and it's impossible to get spare parts for the engine."

Elsewhere on Solovetski, the lighthouse keeper finds himself working in a place where lack of money means that there is no electricity to power the beacon. A lot of the machines and equipment on the islands date from Soviet times, and replacing broken parts is rarely an option. Extreme solutions are sometimes necessary. One fisherman, Viktor Novoselov, recalls what he was obliged to do: Once I was out in the channel, when the bolt holding the motor to the boat just dropped off. The motor sank in about 10 meters of water. Even though the water was something like 4 degrees Celsius, I had no choice but to dive down and drag the damn thing back up again! 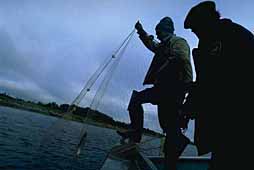 Cold though the waters around Solovki may be, they are not as frigid as the latitude would suggest. The islands lie only some 150 kilometers south of the Arctic Circle, but winters are not severe because of the warming influence of the Norwegian Current, a northern arm of the Gulf Stream. Temperatures only get as low as 10 or 20 degrees below, which - if you are a Russian - means a very mild winter.

When the great winter does descend on Solovki, it brings an undeniable beauty to the place. For the islanders, though, when that long night draws in, there is not an awful lot to do. The only activity is that of winter fishing on one of the lakes. Solovetski has an area of 246 square kilometers, but there are around 500 lakes where winter fishing can be carried out. The process is simple: cut a hole in the ice; drop your line into the hole; drink vodka while you wait for a fish.

Summer is easier to like. And for those with a taste for the quiet, Solovki wouldn't disappoint. There are no cars on the island, only motorbikes, bicycles and a handful of delivery trucks. The relative absence of vehicles, though, has not stopped local officials from enthusiastically peppering all the roadways with traffic signs. With the summer, the locals are able to get about more, but even then do not travel too much except to neighboring islands. The ferry service that used to run between Arkhangelsk and Solovki had to stop when the islanders were no longer able to afford it. 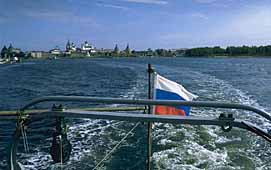 After having been closed for 70 years, the monastery reopened three years ago. Today, it is home to half a dozen monks. The slow process of restoring the old buildings that began in the sixties is continuing. In particular, the St. Nicholas Church has been beautifully restored, and regular services are conducted there. Today, the buildings inside the kremlin, such as the Assumption Cathedral and Transfiguration Cathedral, are places of pilgrimage that attract devotees from all over Russia. Modern visitors to Solovki may not find quite the same seclusion as was first experienced by the devout Savvaty and his monk companion. But they will encounter a relaxed and friendly part of the country that is quietly out of step with the more hurried goings-on elsewhere.