The last couple of years I have lived in Japan and when I return to Russia I usually spend most of my time in Moscow with my family and friends. I don't usually have time at all to travel in Russia. However this time I decided, whatever happens I will take time and go to my favorite places in the North of Russia. While in Russia I used to travel there every year, sometimes several times a year. I love the calm northern nature, pastel sunsets, clean cold waters of lakes and rivers. I also feel very comfortable with people of North Russia: no-nonsense, weather-hardened, not too verbose, but always friendly and hospitable. 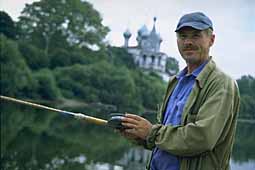 I took long-distance train from Moscow and after a night in a sleeping car arrived to Vologda, which is the capital of Vologda region. I had a couple of hours to spend before my bus departure, so I wandered around with camera, visiting shops, trying to find out what's going on. Comparing with Moscow's dynamic life, Vologda is hybernating. I talked with guy fishing at quiet waters of Vologda-river. It was a weekday, so I asked him is if he was on vacation? Not at all! He use to work at a machine-building enterprise, one of communist-era monsters, giving life to whole regions. Now most of the enterprise is closed. Workers are either laid off or given infinite holidays. So he spends his time fishing or working in his garden. Potato and other vegetables provide a subsistence level. Well, from time to time he can get some compensation from the state which helps him and his family to survive. Most of other factories in the city are at the similar situation. Even to me, a native Russian, it's actually difficult to understand how these people are surviving. Luckily we still have some remains of free health-care system and free education. I know that many families are just living on pensions of their elders. It's a tough, very tough time now in Russia. 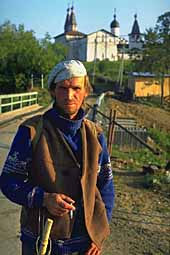 Ferapontovo is a tiny village famous due to it's ancient monastery which was founded in 14 century. Best times for the monastery fall on 15-18 centuties when it was one of the centers of religious life in Russia. It declined at the end of 18 century and was closed down. Some church buildings in the monastery dated by 15 century. Inside the main church there are remains of images painted by famous masters of Andrey Rublev school.
Monastery itself located at exceptionally beautiful place. Build on the top of hill it faces large lake and encircled by a brook from other side.
However for my pictures I mostly interested not in the old stones and landscapes, but in how people live. Ferapontovo is one of places where life seems to be frozen for centuries. Local countryman live and work on the land, depend on weather, harvest. Information age doesn't affect them too much. Well, most of them own TVs, that's it.
Main information exchange happens early in the morning when people bringing their cows to dispatch them for a pasture. It's main highlight of a day. If of course there is no disco or movie at local club. All news and rumors, worries and complains can be heard here. 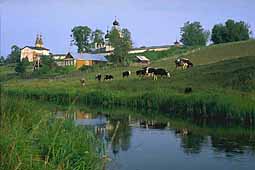 The day I visited this morning "club" it was noisy there. Why are the cow-owners so upset? Nikolai the local cowboy explained that road workers fenced-off the usual place cows used to descent to the river. Cows got lost. People were discontented. Actually cows are very-very important in the life of local families. You might even say that having cows is a way of survival and certain prosperity. Cows are members of families in their own rights. They are humanised.
What happened is that finally the smartest of the cattle figured out how to get down to the river and the rest followed them. Dust settled down, farmers talked for a while and went back home. Only one countryman was late, missed the cow parade and is now driving her cow to the herd. 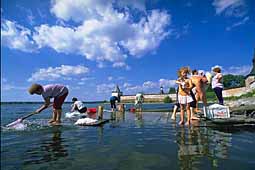 The next place I visited was Kirillov, a town built around the Kirillovo-Belozerskii monastery. This monastery is much larger then one in Ferapontovo and founded at around same time, at the end of the 14th century. The monastery faces a huge lake, a favorite place for local picnics and parties. 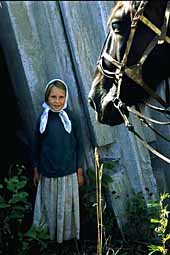 The lake is also used for washing and rinsing clothes. To take this picture I had to walk into the water up to my shoulders. The lake at the north of Russia isn't a Meditaranean resort. Water is cold even in high summer. However my main worry was to keep my camera dry. What if somebody joked around by splashing water into me.

I met this 7 years old in yet another monastery in Vologda region. Just reopened after 90 years of oppresion, it is a women's monastery with only 2-3 nuns. This girl is from Moscow and her parents left her for the summer with nuns to help them in their economics and learn something about life and religion. 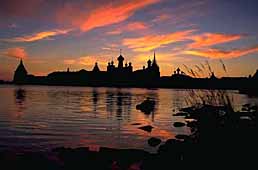 Solovetskie islands or Solovki is perhaps my favorite place in Russia. Maybe after Moscow, I am not sure though. I visited there first while a student and since then have been coming every year, sometimes more then once. I been there in all seasons including winter. Surprisingly for such a high latitude, winter there is rather mild. Not much stronger then in Moscow. Warm currents of Gulfstream touch the White Sea and create that special microclimate and unique nature which together with rich history make Solovki such a special place.
Solovki is the one of the lymph points in Russian history and culture. It hosts important Solovetskii monastery founded in 1436 and survived couple of foreign invasions, internal riots, seeing Petr the Great and other royal piligrims. Over the centuries it became a powerfull economical and cultural center at Russian North.
First I went there with a group of friends to help in restoration of the monastery. I liked the place a lot. While in Moscow I studied the history of Solovki and its architecture and next summer went there as a tour guide. Since then I have been going there regularly. 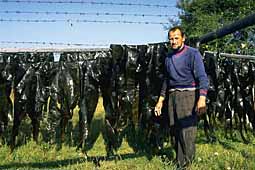 Life on the islands is very uneven. Community of people living there is incredibly mixed and includes a whole spectrum of characters: bums, alcocholics, working people, religious fanatics, high intellegentcia. All coexist in this small community with no more then 2000 inhabitants. During summer the population jumps due to inflow of piligrims, students, tourists and artists.
The last time I visited Solovki was 6 years ago. Almost nothing has changed since then. Influence of perestroika can be seen in shops, where most of products are imported. Same German-made butter, same Findland-made sausage, same crackers from Poland as in Moscow. Only vodka is still Russian, and is no less popular than 6 years ago. Vodka and bread which is (after vodka) the main and the most important food in Russia. Bread prices are still kept under state control. Bread lets old people and low-income families survive.
Another visible sign of change is private boats, bringing piligrims and tourists from the coast town of Kem. Sometimes the captain and crew make good money. However the way they spent money wasn't affected by perestroika. I witnessed captain of one such vessel after successfull run with full bag of vodka. That was the entire day's earnings.
Money on the island are circulates between the local bank and the vodka shop. A story is told that when one day due to poor planning vodka suddenly finished on the island, next payday bank was empty and salaries weren't paid. It's not a joke!